“The Synergy of 5G, EMFs, Environmental Assaults and the Impact on Human Health.  Prevention, Diagnosis and Clinical Nutrition Interventions” 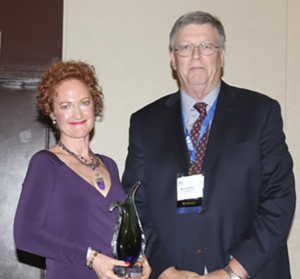 The Excellence in Innovation award is a national award coordinated by the National Alliance of State Pharmacy Associations, and generously sponsored by Upsher-Smith Laboratories, Inc. to recognize and honor a qualified pharmacist who has demonstrated significant innovation in their respective practice, method or service, directly or indirectly, resulting in improved patient care and/or advancement of the profession of pharmacy.

The tradition of designing innovative pharmaceuticals has been the commitment of Upsher-Smith Laboratories and is driven by the ever-changing needs of patients, physicians, pharmacists, and healthcare organizations. Their perspective is not “more products,” but the right products that make people’s lives better. At every level of their business, they are driven to be the best.

The recipient receiving this award today has a pharmacy practice that serves as a model for other pharmacists of what can be offered to patients in today’s rapidly changing healthcare climate.

Lisa Everett, pharmacist and certified clinical nutritionist, is an adjunct faculty member of the University of Missouri-Kansas City School of Pharmacy and the University Of Kansas School of Pharmacy.  She has also served as a clinical instructor for the University of Kansas School of Medicine. Lisa was on the Midwest Internal Review Board for 10 years, overseeing more than 95 studies for the Food and Drug Administration.  She also served on the Board of Trustees for the American Holistic Medical Association.  As vice president of the International and American Association of Clinical Nutritionists, and a member of the American Holistic Medical Association, and the International Association of Compounding Pharmacists, she focuses her practice on holistic patient care and education.

Lisa writes articles for various publications and has lectured to professional and patient groups both locally and internationally, compiling more than 1200 presentation hours.   She is currently writing a book for publication which will provide women, men, and health care professionals with a unique prospective on psychoneuroimmunoendocrinolgy, clinical nutrition, and the environment.

Lisa is co-owner of O’Brien Pharmacy and the Kansas City Holistic Centre in Mission, Kansas.   She has a private consultation practice, in which she utilizes 36 years of experience in outcome-based lifestyle, spiritual, and pharmacologic intervention.  Her work incorporates the principals of biochemically based clinical nutrition, physiology, and pharmacology in the monitoring of patient outcomes as they journey towards the reversal of disease and the reclamation of their health.

Congratulations to Eric Everett, of O’Brien Pharmacy in Kansas City, Missouri, for being named PCCA’s M. George Webber Compounding Pharmacist of the Year. 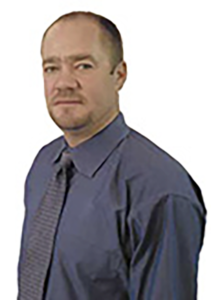 L. David Sparks, PCCA’s President, presented Eric with the award during PCCA’s January International Seminar (see photo at right). “For 2002, we are very pleased to recognize a pharmacist who has demonstrated the highest in quality and ethical standards throughout his pharmacy career,” says David. “Eric has helped to continue a legacy of compounding pharmacy, practicing the lessons his father imparted of always acting in the best and highest good of the patient.”

Founded in 1962 by Eric’s father, Harry Everett, O’Brien Pharmacy today occupies 4,500 square feet, with 300 square feet dedicated to the compounding laboratory, 100 square feet to the sterile laboratory and the remainder to the pharmacy, natural products three exam rooms and four consultation offices. Eric coowns the practice with his sister, Lisa Everett, RPh, CCN. All three pharmacists graduated from the University of Missouri, Kansas City, School of Pharmacy, and worked together for almost 30 years.

As soon as word spread that Eric had been awarded Pharmacist of the Year, commendation letters began arriving from healthcare practitioners, legislators and state medical officials. Jane L. Murray, MD, of Sastun Center Integrative Health Care, wrote, “I have worked closely with Eric and his staff at O’Brien Pharmacy over the last several years to find compounded formulations that will optimize my patients’ medical care. Eric is a superb professional, outstanding pharmacist and true expert in compounding. I have learned so much by working with Eric and having him create novel formulations and delivery systems to help patients.”

Jo Jeanne Callaway, MD, in private practice in Kansas City, lauded Eric for his commitment to continued education. “Some years ago, Eric decided with his sister that it was necessary to become more knowledgeable about clinical nutrition in order to serve patients better pharmacologically. So he undertook a course of study and with my recommendation sat for and passed the examination to become a certified clinical nutritionist. This added fund of knowledge about good human nutrition and nutritional supplements has offered additional service to patients, and of course, has increased his competence as a pharmacist.”

House of Representatives Member Karen McCarthy, Fifth District, Mo.: “O’Brien’s firm commitment to honesty, integrity, and responsibility serves as a national model for the pharmaceutical industry and consumers. Thank you for the work you do each day to meet the compounding needs in our community.”

And finally, John C. Hagan, III, MD, FACS, editor of the Journal of the Missouri State Medical Association, said, “I began to use O’Brien Pharmacy hyaluronidase for my eye surgery patients. The product worked extremely well. With Dr. Warren Hill of Phoenix, Arizona, we began a prospective clinical study comparing O’Brien Pharmacy compounded hyaluronidase with the last available Wydase that North Kansas City Hospital could obtain. Our study was reported at the San Diego 2001 meeting of the American Society of Cataract and Refractive Surgery and published in the International Journal of Cataract and Refractive Surgery, EyeWorld News and Ophthalmic Surgery. We found that O’Brien hyaluronidase worked better than Wydase. The patients had less pain during and after eye surgery, surgeons felt the anesthesia worked better and the product was 30 percent less expensive.”

Eric was able to experience his Pharmacist of the Year evening with his wife, mother and sister in attendance. “Both the surprise and the honor will bring a smile to my face for years to come,” he says. “It is truly a great compliment to be counted among the passionate people of this profession.” On behalf of the entire PCCA staff, congratulations to Eric Everett for being named Pharmacist of the Year.

Preceptor of the Year

Preceptor of the Year, 2009, University of Kansas 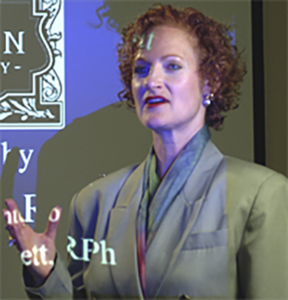 In 2009, Lisa Everett, owner and pharmacist at O’Brien Pharmacy, was awarded the honor Preceptor of the Year by the University of Kansas 2009 pharmacy student body. Nominees for the preceptor of the year award excel amongst their peers in meeting the challenges of educating students in an ever-changing pharmacy world. Students voted for Lisa as a preceptor who proved most influential in their training and exceeded their expectations for clinical experience, knowledge expansion and innovation in the career of pharmacy.

Lisa Everett has set the standard in her practice as one of the most well versed pharmacists in hormones and clinical nutrition. By acknowledging the connection between the mind, body and spirit, and using the idea of a collaborative team approach, Lisa has helped thousands of patients actualize their individual health care goals.

By constantly learning and evolving, Lisa provides an extraordinary example of how pharmacist can move away from the count, pour, lick and stick and be a trusted and knowledgeable resource in the community and across the country for patients and clinicians alike. 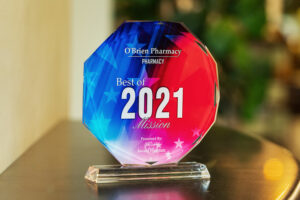 O’Brien Pharmacy has been selected as the winner of the 2021 Best of Mission Awards in the category of pharmacy. The Mission Award Program was created to honor and generate public recognition of the achievements and positive contributions of businesses and organizations in and around Mission. Our mission is to raise the profile of exemplary companies and entrepreneurs among the press, the business community, and the general public. 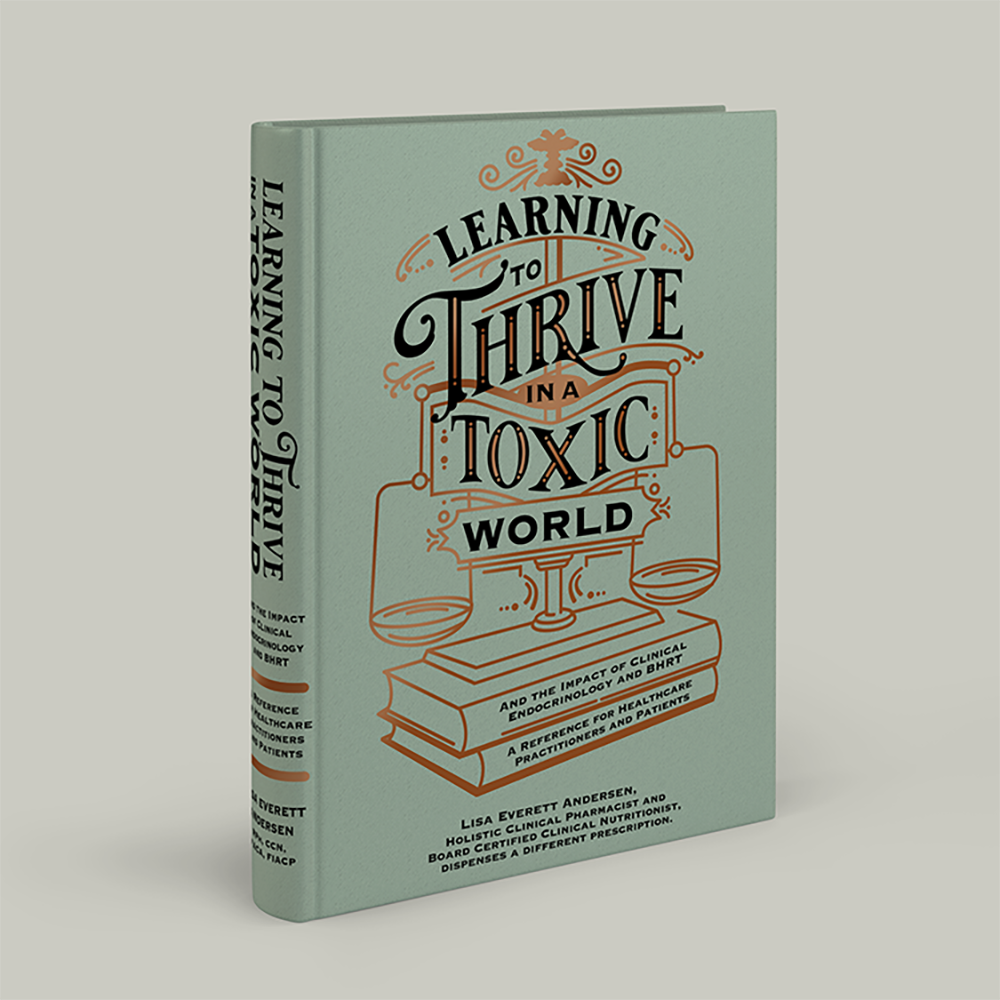 Learning to Thrive in a Toxic World

In the book Learning To Thrive in a Toxic World And the Impact of Clinical Endocrinology and BHRT, A Reference for Healthcare Practitioners and Patients, Lisa Everett Andersen, Holistic Clinical Pharmacist and Board Certified Clinical Nutritionist dispenses a different prescription. This body of work is one practitioner’s attempt to shed some light on these problems and to offer science-based preventative solu-tions that also come from 40 plus years of private practice and clinical research. 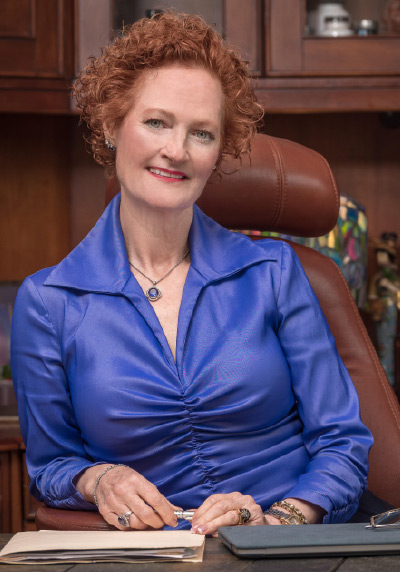 Thank you for your trust and confidence.

At O’Brien Pharmacy, we have but one passion: to serve our global community. We are  dedicated to extraordinary and individualized patient care, providing innovative, well documented, and highest quality medication and holistic solutions for practitioners and patients alike. We promote optimal lifestyle and healing with clinical consultations and the art and science of compounding without compromise. It is with gratitude and our greatest pleasure that we accept our role as a trusted cornerstone in healthcare since 1962.